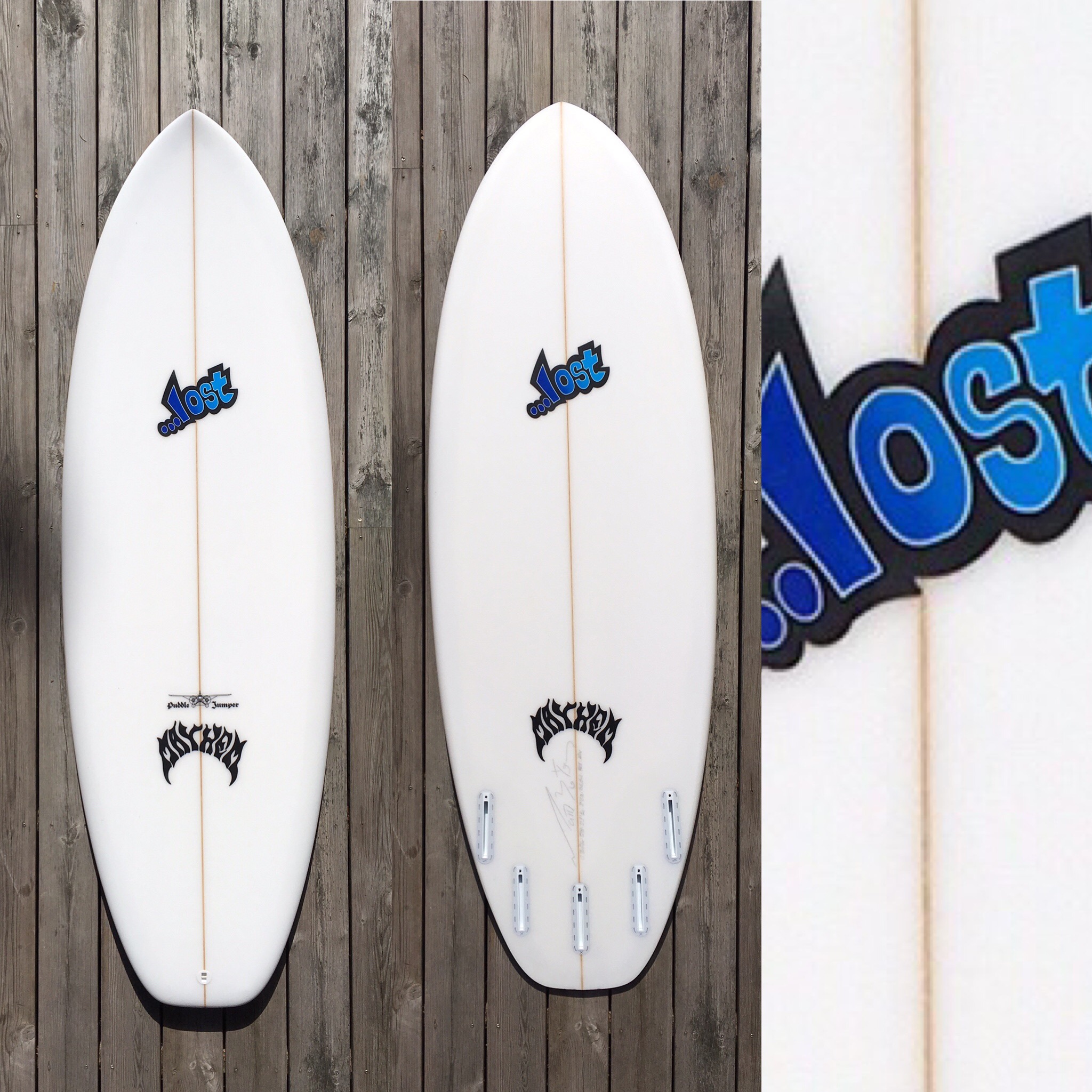 The Puddle Jumper is a con-caved, planing surfacer speeder. Domestic bliss with a twist. Based off the outline of the Bottom Feeder, but with reversed bottom and rocker curves. This board, unlike the past Domestic models (like The Bottom Feeder and RV) features a concave bottom that transitions to vee in the tail. The wide outline makes for easy wave catching and down the line glide and stability. The concave bottom adds lift and increased rail curve, which allows radical top to bottom surfing. The straight rail line and vee in the tail keep the board moving forward and hold in during hard carving maneuvers. “This is the most excited I have ever been about a small wave surfboard. Personally, it’s the best small wave board I have ever ridden. I have never made a claim like that about any board before” / Matt Biolos – Shaper 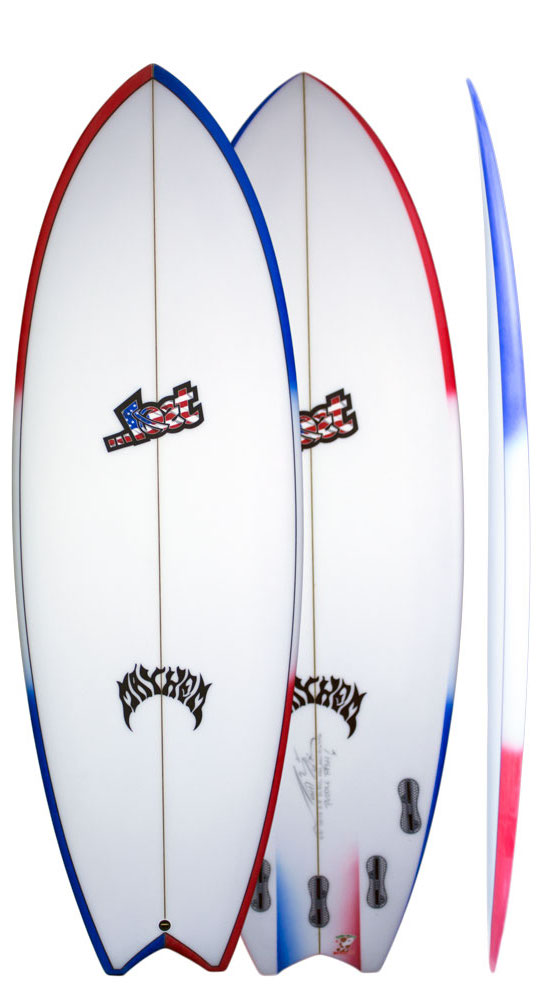 is an extreme little speed machine. A fast and fishy spin on the ever popular Puddle Jumper. Distinctly shaped with an inverted swallow, set inside a wide square tail, and a speed bleeding, afterburner, release channel exiting the tail.

Designed for unadulterated lateral speed in small surf, the PuddleFish sprung forth from an extended flat spell this past summer, and the need for some thing fresh to inspire me to get out there regardless.

Beginning with the Puddle Jumper, and retaining its performance defining rocker and spiral vee under the rear foot, I pushed the wide point slightly forward, widened and squared off the tail block and really pulled in/straightened out the hip area of the outline, between the feet. These changes, combined with reducing the depth of the concave through the center of the board (which straightens and flattens the rail rocker under the front foot) all work together to build a more linear speed down the line, across flats and though slop. The inverted swallow, and angular corners of the square tail, reduces surface area behind the rear foot, adding bite and control without sacrificing the extreme drive generated by the straight tail outline and rail rocker. The entire design is wrapped up with the (optional) speed bleeding, “afterburner”,  release channel, which sits inside the double concave vee panels and is toed in slightly, to run parallel with the rear quad fin placement. The channel then exits  at the apex of the inverted swallow. My goal was to design a board that matches the flat line speed of any alternative “fish” design, without the cumbersome, drifty feeling most of these boards possess, and allow full force, small wave, rail surfing with confidence. 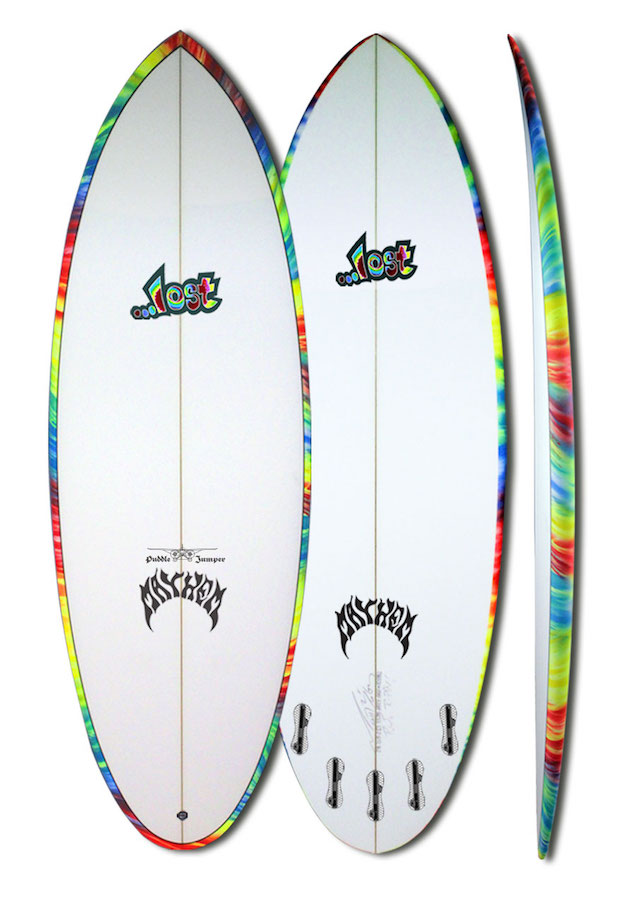 Over the course of 2015, we made a few of these round tail PJ’s as custom orders mainly for people looking to get a little more range out of a board design they really liked. It’s essentially the same board as before, but with a rounded tail that is narrower in the last 18′, and with just a subtle bit of extra rocker bent into the tip and tail. The stock dims are scaled a bit differently, taking into account that many people will ride the round tail 1″ – 2″ longer than the original squash tail PJ. This board will still ride very small waves with ease, yet can be ridden in much larger and powerful surf than the OG Puddle Jumper. The curvier outline (and slightly extra end rocker) fits better in tight radius beach breaks while holding long arcs with control in large, open face point and reef waves…all without forsaking paddle power and stability.