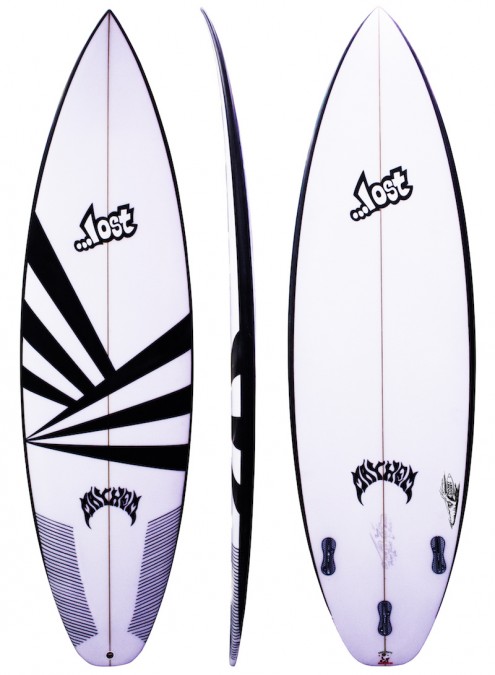 The PocketRocket is the culmination of our work with many WSL surfers, primarily Kolohe Andino. After a stellar start on the 2015 WQS (with a win at the Australia Open) Kolohe’s momentum had slowed by mid-season. He was ready to try some different curves under foot. I offered up examples of alternative curves we were supplying other WT surfers with success- one in particular, code-name “WLG”.

The board featured a moderate continuous rocker, with no discernible flip or break, and more curve in the center of the board (with less in the tips) than usual. For Kolohe, who was used to boards with more overall rocker, I knew we needed to maintain speed and control in tight radius turns to surf more critical in the pocket than currently, all without losing speed and drive.To do so, we really hollowed out the stringer line between his feet and into the rear third of the board, while maintaining the already healthy amount of rail rocker. This made for a deeper, almost exaggerated concave (for lift and speed) but with enough overall curve to still surf radical in the pocket. Somewhat jokingly, I scribbled “PocketRocket” on his first one. 5’11” 18.75″ 2.32″ 27.05cl. He rode it to a QF finish in the Azores WQS 10,000, then won the Cascais Pro-WQS 10,000 on it, texting me after some heat wins “PocketRocket”. Next came the QuikPro-France WCT and his heat in small Hossegor, besting King Kelly, on the same board. Staying together in France that week, we figured out this would make a great board for surfers looking for a modern HP surfboard based off feedback from competitive surfers. Kolohe has always preferred boards with built-in drive and a little extra surface area and volume, so we feel this design is not too “Pro” or extreme in any way. The deep concave and curvy rail rocker work well to provide lift and pop in even smallish, sloppy surf.The conservative overall rocker and outline lends itself to a feeling of confidence to push hard in good, powerful sections, as well. It’s fun in small snappy beach breaks and excels in chest high to 1.5x overhead.